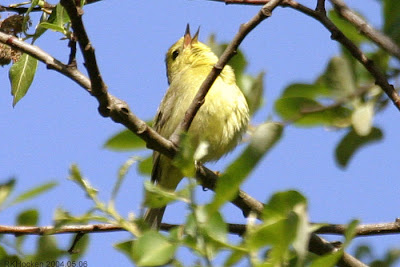 Saturday May 01:
A Ruffed Grouse, a Sooty Grouse and a Black-headed Grosbeak were seen on the Westwood Ridges Trails in Nanaimo.

An American Kestrel was perched on the hydro line along highway 19, overlooking the Ugly Dwarf Meadows at Nanoose Bay.

Monday April 26:
Rare bird alert-"Say's Phoebe"
A Say's Phoebe was seen on driftwood stump down from Mills Street on the Englishman River Estuary in Parksville. The Phoebe was seen for about thirty minutes as it hawked insects and returned to it's perch on one of several driftwood stumps. The stumps are not far from the Surfside RV Park in the meadow area of the estuary down from Mills Street in Parksville.

Two Ringed Turtle-Doves were seen in a backyard along Piper Crescent in Nanaimo.

120 Least Sandpipers, twelve Western Sandpipers, one Dunlin, two Greater Yellowlegs, one Spotted Sandpiper, an American Pipit and a Northern Harrier were seen at the Holden Creek side of the Nanaimo River Estuary.

Sunday April 25:
A Yellow Warbler was spotted visiting a backyard along Dawkins Lane in Nanaimo.

A Yellow-headed Blackbird was seen along Loat Street in Nanaimo.

Thirty Black Oystercatchers were seen at the mouth of the Little Qualicum River in Qualicum Beach.

A Yellow-rumped Warbler was spotted visiting suet feeders in the 300 block of Stevenson Point in Nanaimo.

Wednesday April 20:
A Townsend's Solitaire was seen along Price Road in Parksville.