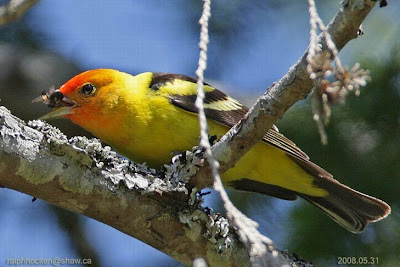 The Tuesday bird walk went to Springwood Park in Parksville. The morning started out with rain for the first hour but the rest of the morning was dry and pleasant.
The highlights included a close up look at a very colourful Western Tanager. The morning was full of bird songs with Pacific-slope Flycatcher, Cassin's Vireo, Warbling Vireo, Red-breasted Nuthatch, Bewick's Wren, Winter Wren, Swainson's Thrush, Orange-crowned Warbler, Yellow Warbler, Yellow-rumped Warbler, Black-throated Gray Warbler, Wilson's Warbler, Black-headed Grosbeak and American Robin entertaining us through out the morning. We had a quick glance at a Western Wood-Pewee as it flew after prey. There was a large flock of Black Swift high up in the sky hawking insects.