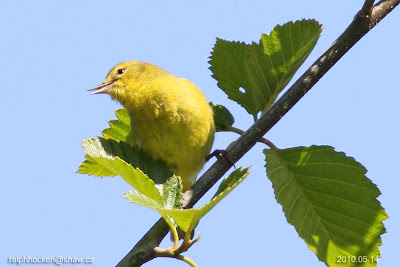 The Tuesday bird walk went to the Beaver Ponds in Nanoose Bay. The morning started with light showers and calm wind but cleared up as the morning progressed. We had great looks at a Hairy Woodpecker near the top of a snag. We heard an Olive-sided Flycatcher, a Willow Flycatcher, several Pacific-slope Flycatchers and a Cassin's Vireo singing throughout the morning. We heard a Yellow Warbler, Townsend's Warbler and a Black-headed Grosbeak singing from high up in the canopy. We managed close looks at several Orange-crowned Warblers, several Yellow-rumped Warblers, a Black-throated Gray Warbler and a Wilson's Warbler.