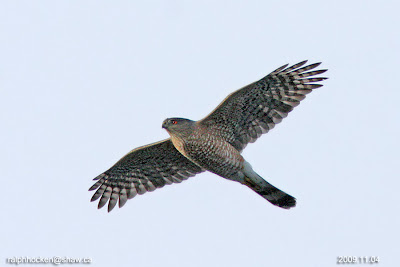 The Parksville/ Qualicum Beach Tuesday bird walk began today for the fall season and went to the Shelly Road side of the Englishman River Estuary in Parksville. The morning was cloudy and cool but the winds were calm.
The highlights of the morning included a good look at a Greater Yellowlegs flying over us, singing as it headed over the forest from the ocean. A Sharp-shinned Hawk flew not far from of us over the estuary, checking out the stumps and shrubs for a morning snack. A Yellow Warbler and a Black-throated Gray Warbler gave us quick looks as they gleaned insects on a short Alder Tree. We had numerous sightings of Black Swifts as we walked back from the viewing platform on the west side of the forest.
Ten birders saw and heard the following thirty-five species of birds:
American Wigeon
Mallard
Surf Scoter
Common Merganser
Great Blue Heron
Bald Eagle
Sharp-shinned Hawk
Killdeer
Greater Yellowlegs
California Gull
Glaucous-winged Gull
Black Swift
Vaux's Swift
Belted Kingfisher
Downy Woodpecker
Northern Flicker
Cassin's Vireo
Steller's Jay
Northwestern Crow
Common Raven
Chestnut-backed Chickadee
Red-breasted Nuthatch
Brown Creeper
Bewick's Wren
Cedar Waxwing
Orange-crowned Warbler
Yellow Warbler
Black-throated Gray Warbler
Spotted Towhee
Savannah Sparrow
Song Sparrow
White-crowned Sparrow
Dark-eyed Junco
Purple Finch
Cassin's Finch