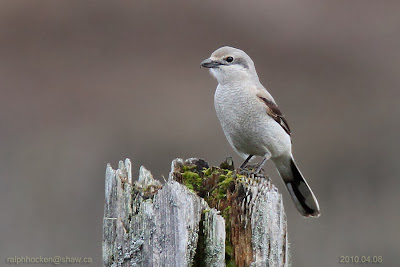 Please remember, when reporting a sighting, to leave your name and phone number,
along with the date, the species and location of your sighting.

Sunday February 13, 2011:
The Sunday bird walk went to Nanoose Bay. The morning started out clear and
sunny but ended up cloudy with a stiff wind off the water. The
highlights included seeing a Northern Shrike perched on a short shrub. Three
Eurasian Wigeon were spotted in with a flock of American Wigeon feeding in the
estuary. We spotted a large flock of Surf Scoters, White-winged and two Black
Scoters further off shore.

"AN EARLY SIGHTING"
An Osprey was seen flying low over Jade Avenue in north Nanaimo and then headed
straight north.

Over forty Evening Grosbeaks were seen in the Cinnabar Valley in south Nanaimo.

Friday February 11:
An American Kestral was seen in a field near the Crow and Gate Pub in Cedar.

A Northern Pygmy Owl was heard calling near Lancashire Avenue and Northfield
Road in Nanaimo.

The Tuesday bird walk went to Nanoose Bay. The morning was cloudy and the wind
was calm. The highlights included seeing a large flock of Northern Pintail
resting near shore on the estuary. Two Eurasian Wigeon were feeding with a
flock of American Wigeon. A pair of Barrow's Goldeneye were spotted further out
on the Bay. Five Black Oystercatchers flew in and started feeding along the
tide line.

A female Anna's Hummingbird was observed gathering cattail fluff for nesting
material and a Lincoln's Sparrow, a White-throated Sparrow and Townsend's
Warbler were seen in the 5300 block of Hammond Bay Road in Nanaimo.