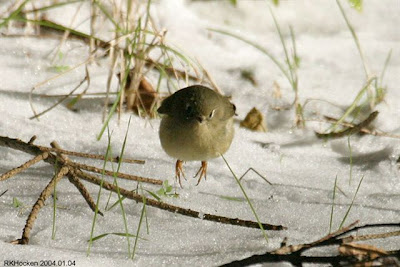 
Please remember, when reporting a sighting, to leave your name and phone number,
along with the date, the species and location of your sighting.

Sunday February 20, 2011:
The Sunday bird walk went to Neck Point in Nanaimo . The morning was sunny but there was a stiff wind off the water.
The highlights included seeing a Hutton’s Vireo feeding on an Alder tree.
A Double-crested Cormorant and two Pelagic Cormorants were resting on a close gravel bar giving us great looks at the coloring of both species. We saw several small flocks of Ruby-crowned Kinglets gleaning insects from the Alder Trees-- one gave us views of his ruby crown. We heard a flock of Pine Siskins from high up in the Alder Trees.

Saturday February 19:
A Turkey Vulture was spotted over Beban Park in Nanaimo.

Over forty Evening Grosbeaks are visiting feeders along Forest Crescent in Nanaimo.

A Common Loon and two Red-throated Loons were seen at Biggs Park in south Nanaimo.

Tuesday February 15:
The Tuesday bird walk went to Rathtrevor Provincial Park in Parksville. The morning was cloudy with a stiff wind off the Strait of Georgia. The highlights included seeing thirty-eight Brant Geese fly in and land just off shore. A large flock of Dunlin, Black-bellied Plover and
Black Turnstone were seen right on the tide line. A large flock of Mew Gulls, California Gulls,
Thayer's Gulls and several Glaucous-winged Gulls were roosting on a gravel bar near the shore. Several flocks with six to nine Common Murre flew down the Strait of Georgia throughout the morning. We spotted a Pigeon Guillemot, a Marbled Murrelet and a Cassin's Auklet bouncing on the waves further off shore.