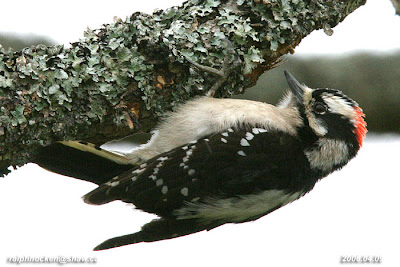 The Tuesday bird walk went to French Creek. The morning was mostly clear with a very strong wind. The surf was up and pounding at Columbia Beach making it too windy for birding so we ventured into the woods along French Creek. Among the highlights was the sighting of our first Orange-crowned Warbler of the year. A mixed flock of Golden-crowned Kinglets, Ruby-crowned Kinglets, Chestnut-backed Chickadee and Red-breasted Nuthatches were feeding high up on the Alder Trees in the forest along French Creek. Purple Finch, House Finch, Song Sparrows and Fox Sparrows were feeding on low bushes. We had great close views of a Downy Woodpecker feeding on an alder tree close to the trail. A Greater Yellowlegs flew past us to finish off the walk.