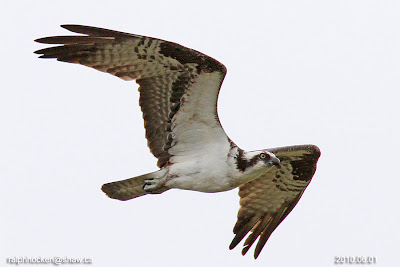 Two Band-tailed Pigeons were seen perched on a high snag along Despard Avenue near Meridian Way in Parksville.

Thursday April 07:
Five Evening Grosbeaks were spotted landing in a group of Alder Trees at the Fairwinds Golf Course in Nanoose Bay.

An Osprey was seen flying high and calling over the Colliery Dam Park in Nanaimo.

A Silver Pheasant was seen along Fillinger Crescent in Nanaimo.

Tuesday April 05:
An Osprey, carrying a fish, was seen heading south from Highway 19 and Nanaimo Lakes Road in Nanaimo.

The Tuesday bird walk went to the Little Qualicum River Estuary. The morning started out cloudy with rain and a sharp wind off the Strait of Georgia, however the morning finished with only cloudy skies and no rain. Harlequin Ducks, Black Oystercatchers, Black Turnstones and large numbers of Bonaparte's Gulls, Mew Gulls, California Gulls, Thayer's Gulls, Glaucous-winged Gulls and a Herring and Western Gull lined the rocks along the shore line from the viewing platform in Qualicum Beach. A hugh raft of Brant Geese, Greater Scaup, Surf Scoters, White-winged Scoters, Black Scoter, Bufflehead, Common Goldeneye, Barrow's Goldeneye, Common Mergansers, Red-breasted Mergansers, Pacific Loons, Common Loons, Horned Grebe's and a Red-necked Grebe were just off shore from the viewing platform. We spotted a Northern Shrike at the estuary. As we left the mouth of the river we saw a massive flock of Gulls lift from the water. The flock stretched from Qualicum Bay past Chrome Island and on towards the mainland---IT WAS A SPECTACULAR SIGHT!

Monday April 04:
An Osprey was heard calling from above Harewood Creek off Glengary Crescent in Nanaimo.

A Yellow-rumped Warbler was spotted in the 2000 block of Labrieux Road in “Nanaimo.

Violet-green Swallows were seen along Doumont Road in Nanaimo.