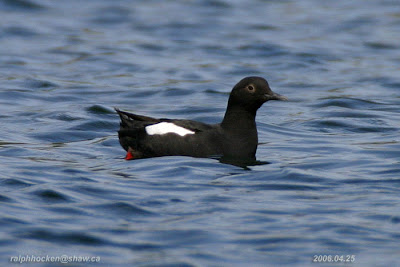 The Tuesday bird walk went to the Englishman River Estuary on the Plummer Road side. The morning was cloudy with a strong biting wind. At the start of the walk we saw a Rufous Hummingbird perched on the top of a short bush on one side of the trail. On the other side of the trail an Anna's Hummingbird was perched on top of a short bush. Just off the Englishman River, we spotted a Northern Shoveler and a Gadwall roosting in among a flock of Mallards, American Wigeon and Northern Pintail. A large flock of Green-winged Teal were feeding on the mud flats. Three Marbled Murrelets flew by just above the water heading down the Strait of Georgia and a Pigeon Guillemot was riding the waves offshore. Large numbers of Brant Geese, Greater Scaup, Harlequin Ducks, Surf Scoters, White-winged Scoters, Long-tailed Ducks, Bufflehead, Common Goldeneye and Red-breasted Mergansers were moving down the Strait throughout the morning, giving us great views.