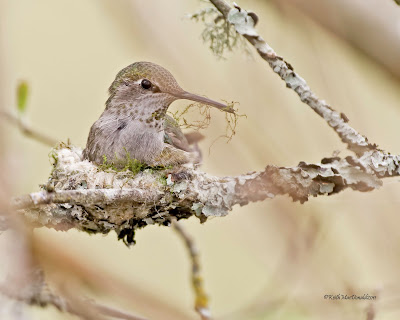 Sunday April 17, 2011:
The Sunday bird walk went to Bowen Park in Nanaimo. The morning was sunny with a cool wind. The highlights included seeing a pair of Red-breasted Sapsuckers playing on the high trees. A Barred Owl called from the forest. We watched as Yellow-rumped Warblers and Orange-crown Warblers gleaned insects from the tall Alder Trees.

Violet-green Swallows were seen swooping and circling over Millard Drive in Lantzville.

Saturday April 16:
The Birdstore has received three different reports of Anna’s Hummingbirds nesting. This is likely their second brood as probably the first brood failed because of the cold weather that we had in February. We had reports from Shell Beach Road in Evening Cove south of Nanaimo, Buttertubs Marsh in Nanaimo and along Aulds Road in north Nanaimo.

A Mountain Blue Bird was seen at Pipers Lagoon in Nanaimo.

Friday April 15:
A Sooty grouse and a Northern Pygmy Owl were seen along Westwood Ridge in Nanaimo.

Two American Goldfinch were seen along Dawkins Lane in Nanaimo.

Wednesday April 13:
A flock of Evening grosbeaks and a flock of Red-winged Blackbirds are visiting feeders in South Wellington.

A Townsend’s Solitare was spotted in a backyard along Cameo Place on Gabriola Island.

Tuesday April 12:
The Tuesday bird walk went to the Englishman River Estuary on the Plummer Road side. The morning was cloudy with a strong biting wind. At the start of the walk we saw a Rufous Hummingbird perched on the top of a short bush on one side of the trail. On the other side of the trail an Anna's Hummingbird was perched on top of a short bush. Just off the Englishman River, we spotted a Northern Shoveler and a Gadwall roosting in among a flock of Mallards, American Wigeon and Northern Pintail. A large flock of Green-winged Teal were feeding on the mud flats. Three Marbled Murrellets flew by just above the water heading down the Strait of Georgia and a Pigeon Guillemot was riding the waves offshore. Large numbers of Brant Geese, Greater Scaup, Harlequin Ducks, Surf Scoters, White-winged Scoters, Long-tailed Ducks, Bufflehead, Common Goldeneye and Red-breasted Mergansers were moving down the Strait throughout the morning, giving us great views.

American Goldfinch and a large flock of Yellow-rumped Warblers were seen at Buttertubs Marsh In Nanaimo.

Monday April 11:
A Flock of Pine Siskins and one Bewick’s Wren were seen visiting a backyard in the 2700 block of Neyland Road in Nanaimo.