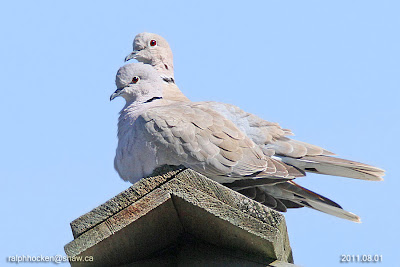 Thursday August 25:
An Eurasian Collared Dove has been heard calling and seen periodically at the Pacific Biological Station in Nanaimo.

Monday August 22:
The early birders went to Columbia Beach/French Creek. The morning was very windy. The surf was up and we had periods of throughout the morning. The big highlight of the morning was seeing and identifying a large number of shorebirds. Four Whimbrel flew past over the water near the parking area at Columbia Beach. At Pebble Beach we saw a large number of Black Turnstones and a flock of fifteen Whimbrel and one Short-billed Dowitcher disappear into the rocks along the shore. After finding the Whimbrel among the rocks we were able to identify the Short-billed Dowitcher. The Dowitcher is smaller than the Black-bellied Plover which were there in large numbers feeding among the rocks. Lots of Killdeer, two Spotted Sandpipers, four Western Sandpipers and ten Least Sandpipers were at the pond along French Creek.
Six birders saw and heard the following thirty-four species of birds:
Canada Geese, Mallard, Northern Pintail, Common Loon, Pelagic Cormorant, Great Blue Heron, Turkey Vulture, Sharp-shinned Hawk, Black-bellied Plover, Killdeer, Black Oystercatcher, Spotted Sandpiper, Whimbrel, Black Turnstone,
Sanderling, Western Sandpiper, Least Sandpiper, Short-billed Dowitcher, Bonaparte's Gull, Mew Gull, California Gull, Glaucous-winged Gull, Eurasian Collared Dove, Rock Pigeon, Belted Kingfisher, Northern Flicker, Northwestern Crow, Common Raven, Purple Martin, American Robin, European Starling, Spotted Towhee, White-crowned Sparrow and
Brown-headed Cowbird.

A Cooper’s Hawk was seen perched between Westhaven Place and Leslie Crescent in Nanaimo.

Sunday August 21:
A Great Horned Owl was spotted in a cherry tree along Villa Road in Nanaimo.