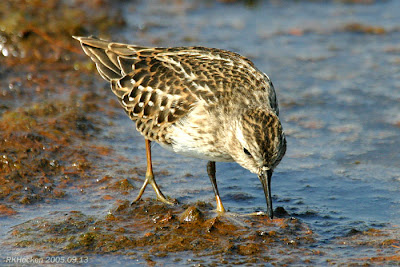 The early birders went to Columbia Beach/French Creek. The morning was very windy, with the surf up and it did rain throughout the morning. The big highlight was the sighting of four Whimbrel flying past over the water near the parking area at Columbia Beach. We went to the Pebble Beach area and after spotting a flock of California Gulls, a large number of Black Turnstones we saw a flock of fifteen Whimbrel and one Short-billed Dowitcher fly into the shore and disappear into the rocks along the shore. After finding the Whimbrel,the Black-bellied Plovers and the Short-billed Dowitcher among the rocks we were able to identify the Short-billed Dowitcher. The Dowitcher is smaller than the Black-bellied Plovers which were there in large numbers feeding among the rocks. Lots of Killdeer, two Spotted Sandpipers, four Western Sandpipers and ten Least Sandpipers were at the pond along French Creek.