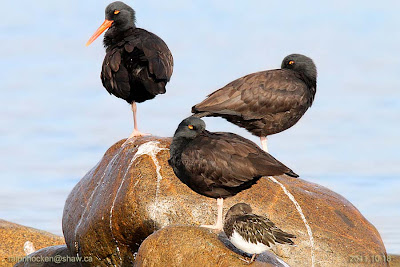 Thursday November 03:
A Fox Sparrow was heard singing and a flock of California Quail were visiting feeders at the Pacific Biological Station in the 3100 block of Hammond Bay Road in Nanaimo.

The Purple Martin charity dinner and silent auction:
Come join us on Saturday, November 12 at the Coast Bastion in Nanaimo for "A Night in Brazil" charity dinner and silent auction for the BC Purple Martin Recovery Program. We are celebrating the most successful year of the 25-year nest box recovery program (730 pairs up from 5 pairs in 1985) and the fall migration of our Purple Martins to SE Brazil, a 11,000 km trip one way as well as raising funds for the 2012 recovery program.