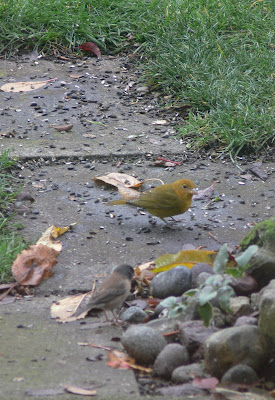 “Rare bird alert-Summer Tanager”
A Summer Tanager was seen and photographed at about 10 a.m. on Saturday, November 19 in the backyard of a private residence in the French Creek area (the owners request that their location be kept private).
The bird was last seen on Friday November 25. Check birdfeeders, fruit trees and berry bushes in the French Creek/Columbia Beach area.
The Summer Tanager is usually found in the southern United States, Central and South America, with only a few records of sightings in British Columbia.

A Snowy Owl was seen at the Nanaimo River Estuary in South Nanaimo.

Thursday November 24:
A White-throated Sparrow was seen along Bluebell Terrace in the Hospital area of Nanaimo.

Friday November 25:
A Turkey Vulture was seen being attacked by a Common Raven and a Bald Eagle over Highway 19, between Jinglepot Road and Fifth Street in south Nanaimo.

Tuesday, November 22: The Tuesday bird walk went to Columbia Beach. The morning was sunny and warm with calm winds, making for a great morning of birding. The highlights included seeing three Black-bellied Plover, several Black Oystercatcher, one Greater Yellowlegs, ten Black Turnstones and a large flock of Western Sandpipers on the gravel bar near Pebble Beach. Seven Eurasian-collared Doves were perched on trees along the road. We saw a large number of White-crowned Sparrows and Golden-crowned Sparrows near the end of the walk.

Tuesday November 15:
A Hermit Thrush was seen along Hartwood Crescent in the Rocky Point area of Nanaimo