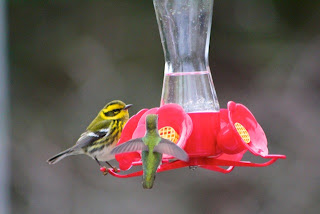 Townsend's Warbler and an Anna's Hummingbird: Photo by a Birdstore Customer.

Saturday September 22:
A Seller’s Jay and two Dark-eyed Juncos were seen at feeders along Meridian Way in Parksville---winter is coming!