To report your sightings phone the Store at 250-390-3669 or e-mail us at thebackyard@shaw.ca Please remember, when reporting a sighting, to leave your name and phone number along with the date, the species and location of your sighting.


The Sunday bird walk went to the Neck Point Park in Nanaimo. The morning was sunny and warm. We saw several Red-necked Grebes, Surf Scoters, Pacific Loons and Pelagic Cormorants on the water. The surprise of the morning was the sighting of a Hermit Thrush just off the path. 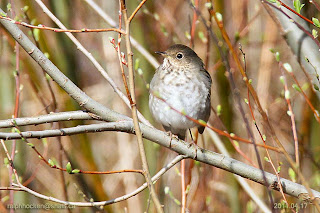 Friday, October 11:  A Lapland Longspur and a Horned Lark were seen at Piper’s Lagoon in Nanaimo.

Fifteen Western Meadowlarks were seen this evening at the Nanaimo River Estuary in south Nanaimo.


A Barn Owl was spotted near Coventry Place in Nanoose Bay.


The Tuesday bird walk went to the Englishman River Estuary Plummer Road side. The morning was very windy as there was a strong wind off the Strait of Georgia. The tide was very high and we were not able to walk along the shore of the estuary. The surf was up, but we did manage to spot two Pacific Loons in breeding plumage in the surf. A large flock of Pacific Loons and Surf Scoters flew down the Strait. A good number of American Robins, Chestnut-backed Chickadees and Dark-eyed Juncos spent most of the morning flying and perched. We spotted our first of the year Eurasian Widgeon in with a flock of American Widgeons on the receding tide.


Four Sandhill Cranes were seen in a farm field near the Englishman River Falls.


.  A possible Red-napped Sapsucker was spotted near Westdale Road and Norasea Road in Nanaimo.


The Nanoose Naturalists meeting will be held at 7pm at the Nanoose Library Hall.


Guest speaker will be John Neville and he will talk about the Raptors of Canada.


The Tuesday bird walk on October 15 will be going to The Little Qualicum River Estuary in Qualicum Beach. Meet at the Parksville Community Park at the parking lot near the Lions Club playground at 9:00 am or the viewing platform in north Qualicum Beach Park at about 9:20 am.