NANAIMO BIRD REPORT
“EXPLORE NATURE---GO BIRDING”
To report your sightings phone the Store at 250-390-3669 or e-mail us at
thebackyard@shaw.ca
Please remember, when reporting a sighting, to leave your name and phone number along with the date, the species and location of your sighting.


Sunday, May 24, 2015:
The Sunday bird walk went to Morrell Wildlife Sanctuary in Nanaimo. The morning was cloudy and the winds were calm. The highlights included seeing a Barred Owl fly in and perch on a tall conifer giving us close views. We watched a family of Hairy Woodpeckers feed on a snag close to the trail. A Chestnut-backed Chickadee flew in and out of a nest in a short snag.  A Hooded Merganser and its cute fledgling were swimming on Morrell Lake. 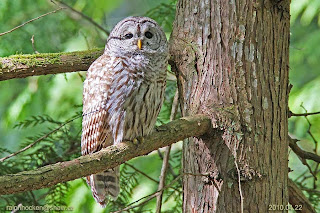 
Saturday, May 23:
A Whimbrel, Western and Baird’s Sandpiper, Greater Yellowlegs and Black-bellied Plovers were seen on the mud flats on the Plummer Road side of the Englishman River Estuary in Parksville.


Two Olive-sided Flycatchers were heard and seen in the woods above Colbourne Drive in Nanaimo.


A Pigeon Guillemot was seen off shore at Neck Point Park in Nanaimo.


Friday, May 22:
Two Whimbrels were seen along the tide line on the Strait of Georgia off the Plummer Road side of the Englishman River in Parksville.


Wednesday, May 20:
A Pigeon Guillemot was seen off shore at Piper’s Lagoon in Nanaimo.


The Tuesday bird walk went to Lot Ten in north Qualicum Beach. The morning was sunny and warm with calm winds. California Quail were seen at the start of the walk. A Spotted Sandpiper was preening on a Little Qualicum River gravel bar giving us great views. Pacific-slope Flycatchers and Hammond’s Flycatchers were singing high up in the tall trees. A Black-headed Grosbeak swooped in just above us singing his vibrant song that we heard for most of the morning. Several Red-breasted Sapsuckers flew near us as we walked on the trail. Yellow Warblers were singing and they stopped long enough to give us great views. Western Tanagers entertained us and we had several great views of them high in the conifers across the river. A Red-eyed Vireo was singing his long song high up in the tall trees next to the trail.  We heard the song but there were no views for us! 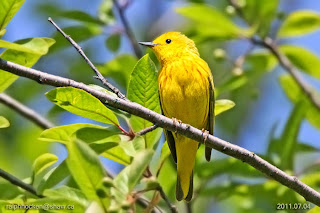 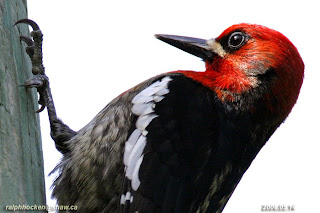