The Tuesday bird walk went to the Little Qualicum River Fish Hatchery north of Qualicum Beach. The morning was cloudy and the winds were calm. As the morning went on, the clouds moved out and it was sunny and warm.   Fourteen Turkey Vultures were catching a thermo high above us at the start of the walk.  We watched Red-breasted Sapsuckers just off the trail.  We  spotted a Rufous Hummingbird's nest with a young hummingbird being fed by female Rufous Hummingbird.  Pacific-slope Flycatchers, Hammond’s Flycatchers, Warbling Vireos and Swainson's Thrush were heard and seen throughout the morning.  We watched Black-throated Gray Warblers and a MacGillivray's Warbler feeding and singing not far from the trail.  An American Dipper and it’s fledgling  caught our attention on the river. The young one was constantly calling, keeping the adult busy searching for food for it under the water. 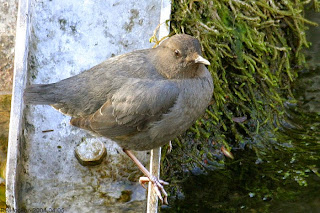 
The Tuesday bird walk on June 02, 2015 will be going to the Shelly Road side of the Englishman River in Parksville.