The Tuesday bird walk went to the Little Qualicum River Estuary in Qualicum Beach. The morning was partly sunny with calm winds making a good day for birding.
A large number of Black-bellied Plovers, Black Turnstones, Black Oystercatchers and one lone Dunlin greeted us at the viewing tower.  There was a flock of Ancient Murrelets further off shore. We had the unusual sighting of four River Otters swimming and playing at the mouth of the river. There were also many Seals offshore keeping an eye on us. The trees around the estuary were loaded with Bald Eagles.  Four Trumpeter Swans and large numbers of Great Blue Herons were resting on the estuary. Hundreds and hundreds of Pacific Loons and Common Murre were flying down the Strait of Georgia. 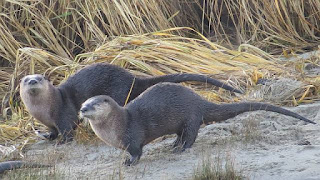 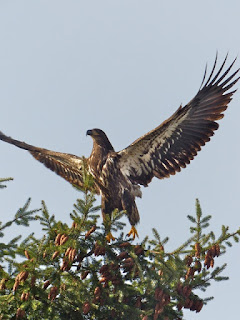 
The Tuesday bird walk on January 26, 2016 will be going to the Plummer Road side of the Englishman River in Parksville. Meet at the Parksville Community Park near the Lions Club Kids Playground Parking Lot at 9:00 a.m. or at the corner of Plummer Road and Shorewood Drive at about 9:10 a.m.