Tuesday bird walk, October 04, 2016.
The morning was cloudy with strong winds off the very choppy Strait of Georgia. There were a few light showers throughout the morning.  American Widgeon, Surf Scoters and White-wing Scoters were seen flying down the Strait.  Mew Gulls, a Western Gull, California Gulls, Thayer's Gulls, Glaucous-winged Gulls and a Herring Gull were resting on the gravel bar. Six Black Oystercatchers, several Black-bellied Plovers, thirty Black Turnstones and three Killdeer were  feeding along the gravel bar at the pond, near Pebble Beach.  Song Sparrows, White-crowned Sparrows, Golden-crowned Sparrows, House Finch and Purple Finch were seen and heard along French Creek. 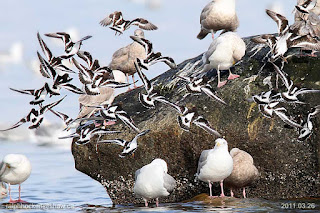 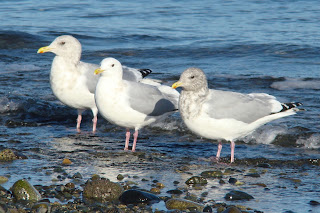 
The Tuesday bird walk on October 11, 2016 will be going to the Shelly Road side of the Englishman River in Parksville. Meet at the Parksville Community Park at the Lions Club Kids Playground at 9:00 a.m. or at the end of Shelly Road on the Oceanside of highway 19a in Parksville at about 9:10 a.m.