The Tuesday bird walk went to the Shelly Road side of the Englishman River Estuary in Parksville. The morning was sunny and warm.  We saw and heard a large number of Golden-crowned Kinglets at the start of the walk.  A Barred Owl was perched on a snag not far from the trail, giving us great long views.  We had six sightings of Northern Shrike perched at the top of shrubs on the meadows.  A large flock of Black Turnstones landed on a log next to the shoreline near American Wigeons, Mallards, a Northern Shoveler, Northern Pintails and Harlequin Ducks. We watched in fascination as a  Bald Eagle swooped in and chased a Mallard for a about 10 minutes before catching him. The Eagle held the Mallard under the water until the Mallard broke free, with the Eagle in hot pursuit.  The Mallard escaped to the cheering birders!  A  Sharp-shinned Hawk and a Red-tailed Hawk were seen high overhead. 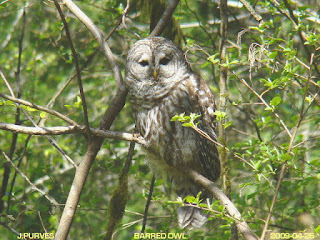 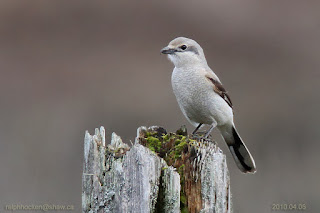 
The Tuesday bird walk on October 18, 2016 will be going to Lot Ten north of Qualicum Beach. Meet at the Parksville Community Park at the parking lot near the Lions Club Kids playground at 9:00 a.m. Or at the Brant Viewing platform in north Qualicum Beach at about 9:20 a.m.