The Tuesday bird walk went to Deep Bay.  This morning was a mix of weather--cloudy with light rain showers, occasional sunny periods and very strong winds off the Strait of Georgia.  A flock of Snow Geese flew over head going down the Strait.  Four Barrow’s Goldeneye were seen swimming near shore.  A mixed flock of Black-bellied Plovers and Dunlin along with one lone Black Turnstone landed on a gravel bar near shore giving us great views.  Large numbers of Surf Scoters, White-winged Scoters, Black Scoters, Long-tailed Ducks, Horned Grebes and Red-necked Grebes were seen on the water between the Deep Bay and Denman Island.
Seventeen birders saw and heard the following fifty-five species: 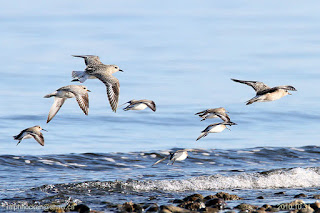 
The Tuesday birdwalk on November 15, will be going to the Shelly Road side of the English River Estuary in Parksville.  Meet at the parking lot next to the Lions Club Kids Playground at 9:00 a.m. or at the end of Shelly Road on the ocean side of highway 19a at about 9:10 am.