The Tuesday bird walk went to the Brandt viewing platform and Lot Ten in north Qualicum Beach. The morning was clear and sunny with calm winds, making for a very pleasant bird walk.  The highlight of the morning was when we sighted four Humpbacked Whales far offshore. The whales entertained us royally for an hour as we watched them spout and breach.  Two Western Grebes were spotted in with a flock of Buffleheads not far from shore.  A Long-tailed Duck flew just above the water heading down the Strait Of Georgia.  Red-breasted Mergansers, Common Mergansers and Black Scoters were seen not far from shore.  At Lot Ten we watched large numbers of Glaucous-winged Gulls feeding on fish carcasses along the river banks. 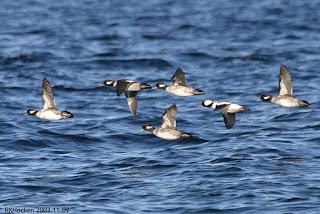 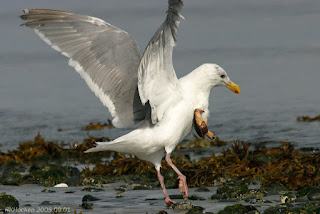 
The Tuesday bird walk on November 07, 2017 will be going to the Englishman River, Plummer Road side in Parksville. Meet at the Parksville Community Park (at the parking lot in front of the Lions Club Playground) at 9:00 a.m. or at corner of Plummer Road and Shorewood Drive at about 9:10 a.m.