Parksville/Qualicum Beach Tuesday Bird Walk, April 17, 2018
The Tuesday bird walk went to the Shelly Road side of the Englishman River in Parksville. The morning was cloudy with calm winds.  A Hermit Thrush was spotted just off the trail.  A Trumpeter Swan and three Canada Geese were seen along the river.  Two Townsend’s Solitaires were seen perched in a berry bush not far from the trail. A Sharp-shinned Hawk was seen high up in a tall tree.  White-crowned Sparrows and Golden-crowned Sparrows were heard singing all morning.  A Chipping Sparrow was spotted just off the trail. We watched a Lincoln’s Sparrow preening itself in a bush near the trail. A Barred Owl was perched next to the trail giving us great views. 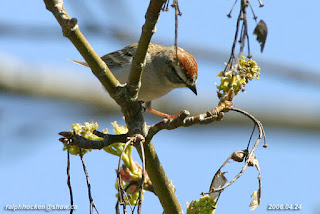 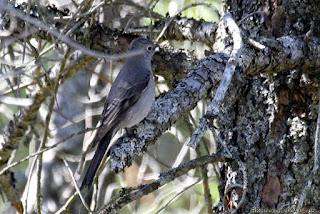 Townsend’s Solitaire: Ralph Hocken Photo:
Please Note
Check this site (www.thebirdstore.blogspot.com) early Tuesday and Sunday on stormy mornings to see if the walks have been cancelled!


The Sunday Bird Walk on April 22, 2018 will be going to Legacy Marsh in upper Lantzville. Meet at the Bird store at 9:00 am or under the hydro lines along Normarel Drive in upper Lantzville at about 9:20 a.m.
The Tuesday Bird Walk on April 24, 2018 will be going to the Plummer Road side of the Englishman River in Parksville.  Meet at the Parksville Community Park (near the Lions Club playground parking lot) in Parksville at 9:00 am, or at the corner of Plummer Road and Shorewood Drive on the oceanside of Highway 19a at about 9:10 am.