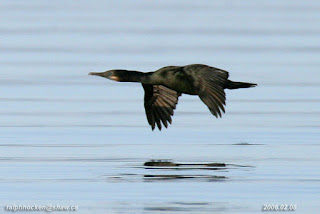 
Friday, May 04:
A Sooty Grouse was as seen at the top of Westwood Ridge in Nanaimo.


Thursday, May 03:
Fourteen American White Pelicans were seen at the head of Nanoose Bay right by the estuary.


A Black-headed Grosbeak was seen at Morrell Sanctuary in Nanaimo.

The Tuesday bird walk went to Moorcroft Regional Park in Nanoose Bay.  The morning was sunny with strong winds. A Dunlin and four singing Black Oystercatchers were seen along the rocky shores.   Six Pacific Loons and two Marbled Murrelet’s were seen offshore. We saw a Killer Whale breeching off shore.  We heard a Swainson’s Thrush calling just off the trail.  A Pacific-slope Flycatcher was spotted perched near the trail. Orange-crowned Warblers, Yellow-rumped Warblers, Black-throated Gray Warblers and Townsend’s Warblers entertained us all morning. 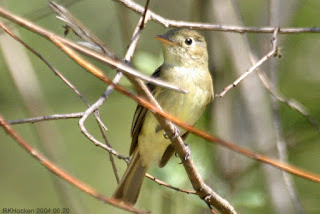 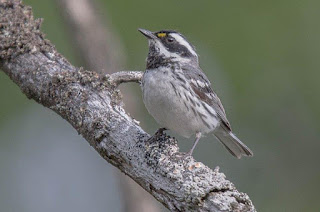 Black-throated Warbler: Ralph Hocken Photo:
A Cinnamon Teal was seen at Buttertubs Marsh near the tall viewing tower, in Nanaimo.
Monday, April 30:
Evening Grosbeaks were seen along Douglas Street in Nanaimo.
Saturday, April 28:
A Yellow-Headed Blackbird is visiting a yard in the 700 block of Ermineskin Avenue Parksville.
Please Note
Check this site (www.thebirdstore.blogspot.com) early Tuesday and Sunday on stormy mornings to see if the walks have been cancelled!


The Sunday Bird Walk on May 13, 2018 will be going to the Beaver Ponds in Nanoose Bay.  Meet at the Bird store at 9:00 am or at the Beaver Ponds parking area (Take Highway 19 to Northwest Bay Road go to Power Point Road, follow Power Point Road to the four way stop and  then go about one hundred yards to the parking area on the left)  about 9:20 am.


The Tuesday Bird Walk on May 08, 2018 will be going to the Little Qualicum River Fish Hatchery in north Qualicum Beach.  Meet at the Parksville Community Park (near the Lions Club playground parking lot) in Parksville at 9:00 am, or at the Brant Viewing Platform along Highway 19a in North Qualicum Beach at about 9:20 am.
Good birding
Neil Robins