Parksville/Qualicum Beach Tuesday Bird Walk, March 12, 2019,
The Tuesday bird walk went to Columbia Beach in French Creek. The morning was sunny but cool with very strong winds off the Strait of Georgia.  The highlight of the morning was thousands upon thousands  of Gulls either on the Strait or flying, including Glaucous Gulls, Mew Gulls, California Gulls, Iceland(Thayer's) Gulls, Herring Gulls and Glaucous-winged Gulls. There was also vast numbers of Brant Geese on the Strait. One Glaucous Gull was seen not five feet from the shore giving us great views.  Many flocks of Surf Scoters, White-winged Scoters and Long-tailed Ducks heading up the Strait. A Cooper’s Hawk was perched in a tree not far from the trail checking us over for the longest time. The Herring Spawn has arrived! 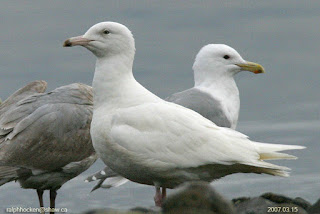 The Sunday Bird Walk on March 17, 2019 will be going to the Nanaimo River Estuary in south Nanaimo. Meet at the Backyard Wildbird and Nature Store (6314 Metral Drive in Nanaimo) at 9:00am or at the end of Raines Road off Cedar Road at about 9:30am.