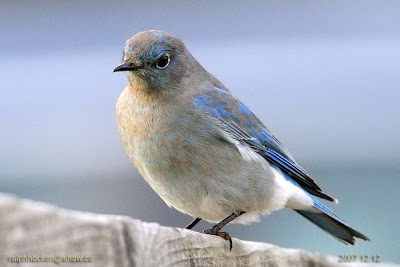 To report your sightings
please phone the Store at 390-3669
or e-mail us at thebackyard@shaw.ca
or call the Bird Alert at 390-3029
Post your sightings on these sites:
www.thebirdstore.blogspot.com
http://groups.yahoo.com/group/bcbirdingvanisland/messages
Please remember, when reporting a sighting, to leave your name and phone
number, along with the date and location of your sighting.

Friday January 11:
Two Mountain Bluebirds were spotted at the Nanoose Edibles in the berry orchard along Stewart Avenue in Nanoose Bay.

Wednesday January 09:
A large flock of Trumpeter Swans were seen in a farmer's field near Hill Road and Cedar Road in Cedar.
An American Kestrel was seen perched high in a tree at the Ugly Dwarf Meadows in Nanoose Bay.
A male Common Merganser and a Hooded Merganser were seen at Buttertubs Marsh in Nanaimo.
A female Sharp-shinned Hawk was spotted in the tall fir trees behind the Government Weigh Scales in Parksville.

Tuesday January 08:
An Anna's Hummingbird was spotted at feeders in the 2500 block of Glenayr Drive in the Departure Bay area of Nanaimo.
Over 3000 Pine Siskins were seen swarming in trees along River Bend Road near the Nanaimo River in Cassidy.

Monday January 07:
A large flock of American Robins were turning over leaves in the forest at the top of Corfield Street in Parksville. They were soon joined on the ground by Northern Flickers, Song Sparrows, Spotted Towhees, Dark-eyed Junco and Purple Finch. A flock of sixty Pine Siskin's were gleaning from the buds on the Alder Trees.
A Peregrine Falcon flew high over the trees.
A female Long-tailed Duck, a Buffhead and a Horned Grebe were seen feedingtogether at the Deep Bay Spit.

Sunday January 05:
A Common Murre was spotted about ten feet from shore at Piper's Lagoon in Nanaimo.