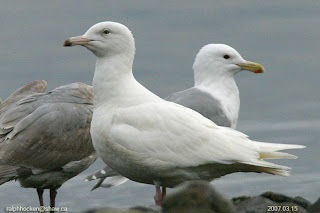 Glaucous Gull at Qualicum Beach: Ralph Hocken Photo.
To report your sightings
please phone the Store at 390-3669
or e-mail us at thebackyard@shaw.ca
or call the Bird Alert at 390-3029
Post your sightings on these sites:
www.thebirdstore.blogspot.com
http://groups.yahoo.com/group/bcbirdingvanisland/messages
Check out the Audubon site for the Christmas Bird Counts.
http://www.audubon.org/bird/cbc/hr/
Please remember, when reporting a sighting, to leave your name and phone
number, along with the date and location of your sighting.

A Merlin was seen chasing a large flock of Pine Siskins in the 2500 block of Glenayr Crescent in Nanaimo.
Over fifty Trumpeter Swans were seen at the Ugly Dwarf Meadows in Nanoose Bay.

Saturday January 19:
Two Yellow-rumped Warblers were seen at suet feeders in the Harwood area of Nanaimo.
A lone Steller's Jay was spotted along Hamilton Avenue and Sixth Street in the Harewood Area of Nanaimo.

Friday January 18:
A Varied Thrush was spotted at a ground feeder along Nanaimo Lakes Road backing onto the Morrell Wildlife Sanctuary in Nanaimo.

Tuesday January 15:
A Northern Pygmy Owl was calling near Beban Park in Nanaimo.
A Northern Shrike was seen at French Creek.
Six Bufflehead were seen at Long Lake near Highway 19a in Nanaimo.

Monday January 14:
Twenty Bushtits were spotted at a suet feeder near Buttertubs Marsh in Nanaimo.
Sunday January 13:
Four Short-eared Owls, a Northern Shrike, a juvenile Chipping Sparrow, twelve Golden-crowned Sparrows, a Sharp-shinned Hawk and several Western Meadowlarks were seen at the Nanaimo River Estuary in south Nanaimo.
One hundred Pine Siskins, Anna's Hummingbirds and fifteen Purple Finches are coming to feeders along Remora Place in Nanoose Bay.
Fourteen Trumpeter Swans, two Glaucous Gulls, one Red-necked Grebe and a Wilson's Snipe were seen at the Nanoose Bay Estuary.
There was a sighting of a possible Rough-legged Hawk at Buttertubs Marsh in Nanaimo.