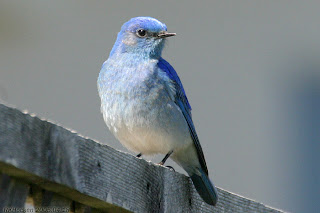 Mountain Bluebird: Ralph Hocken Photo.
To report your sightings
please phone the Store at 390-3669
or e-mail us at thebackyard@shaw.ca
or call the Bird Alert at 390-3029

Sunday April 06, 2008:
The Sunday bird walk went to Nanaimo River Estuary in Nanaimo. Among the highlights of the morning were the sightings of a Short-eared Owl and seven Western Meadowlarks on the Estuary. On the way out of the Estuary several of us saw three Lesser Yellowlegs and a Yellow-rumped Warbler feeding on a gravel bar on the Nanaimo River. Four birders stopped at the south end of the Nanaimo Airport and found one female and three mal Mountain Bluebirds.

Saturday April 05:
Six Mountain Bluebirds were spotted at the south end of the Nanaimo Airport along the fence on Simpson Road.

Thursday April 03:
A male and female Mountain Bluebirds were seen along Simpson Road at the south end of the Nanaimo Airport.

Tuesday April 01:
A Townsend's Solitaire was seen in a backyard in the 300 block of Clarkson Place in Parksville.

Monday March 31:
A Yellow-rumped Warbler, a Red-breasted Sapsucker and a Rufous Hummingbird are visiting feeders in the 4700 block of Shell Beach Road in Ladysmith.

Friday March 28:
Silver Pheasants were seen in a backyard along Bayshore Drive and at the south end of Waldbank Road in Nanaimo.