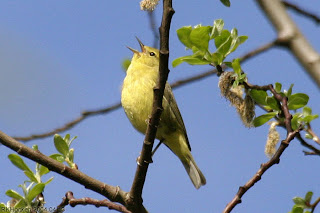 The Wednesday Bird Walk went to the Springwood Park in Parksville. Fourteen birders found twenty-eight species of birds during the morning. Included in the highlights was the sighting of a Brown Creeper flying into it's nest under the bark of an Alder Tree. It flew out after a few minutes and then went back into the nest several times. It was definitely getting the nest ready for eggs. We found a round hole in a snag and then noticed a female Northern Flicker looking down at us! We also saw an Orange-crowned Warbler and heard a Cassin's Vireo, California Quail and a Ring-necked Pheasant during the walk. There was a continual course of songs through out the morning.