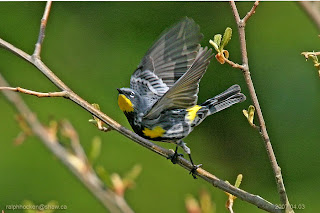 Thursday April 10:
A pair of Cinnamon Teal were seen at the mouth of French Creek.
A male American Goldfinch was seen along Superior Road in Lantzville.
Wednesday April 09:
A Bullock's Oriole was seen in the 1700 block of Centenary Drive in Nanaimo.
A Common Yellowthroat was spotted at Somenos Marsh in Duncan.
Band-tailed Pigeons were seen along Westwood Ridge in Nanaimo.
The Wednesday Bird Walk went to the Springwood Park in Parksville. Fourteen birders found twenty-eight species of birds during the morning. Included in the highlights was the sighting of a Brown Creeper flying into it's nest under the bark of an Alder Tree. It flew out after a few minutes and then went back into the nest several times. It was definitely getting the nest ready for eggs. We found a round hole in a snag and then noticed a female Northern Flicker looking down at us! We also saw an Orange-crowned Warbler and heard a Cassin's Vireo, California Quail and a Ring-necked Pheasant during the walk. There was a continual course of songs through out the morning.
Fourteen birders found the following twenty-eight species of birds:
Ring-necked Pheasant, California Quail, Bald Eagle, Rufous Hummingbird, Northern Flicker, Cassin's Vireo, Northwestern Crow, Common Raven, Chestnut-backed Chickadee, Bushtit, Red-breasted Nuthatch, Brown Creeper, Bewick's Wren, Winter Wren, Golden-crowned Kinglet, Ruby-crowned Kinglet, American Robin,
European Starling, Orange-crowned Warbler, Spotted Towhee, Song Sparrow, White-crowned Sparrow, Dark-eyed Junco, Red-winged Blackbird, Red Crossbill, Purple Finch, House Finch and Pine Siskin.
Tuesday April 08:
Two Evening Grosbeaks were seen along Stillin Drive in Ladysmith.
A juvenile Anna's Hummingbird was visiting flowering currant bushes in the 1000 block of Dunsmuir Crescent in Ladysmith.
A Say's Phoebe was seen in a backyard in the 4200 block of Discovery Drive in Campbell River.
Monday April 07:
A Wilson's Snipe, a Ring-necked Pheasant and a Peregrine Falcon were seen at the Cottonwood Golf Course in south Nanaimo.
A female Mountain Bluebird and a Savannah Sparrow were seen at the Nanaimo River Estuary in south Nanaimo.