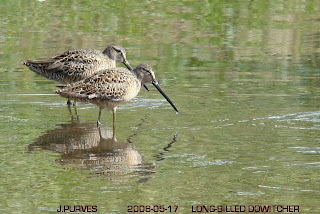 An American Kestrel and a Red-tailed Hawk were seen at the Ugly Dwarf Meadows in Nanoose Bay.
Six Bald Eagles, thirty-six Great Blue Herons and three Oystercatchers were seen at low tide off Jack Point Park in south Nanaimo.

Saturday, May 17:
Five nestling Barn Owls were seen on Gabriola Island.
Two male Blue-winged Teal and four Long-billed Dowitchers were seen at French Creek.
A Barred Owl and a Cassin's Vireo were seen at the Englishman River, Shelly Road side in Parksville.
Evening Grosbeaks were seen in Cinnabar Valley in south Nanaimo.
A male Black-headed Grosbeak was spotted just north of the Little Qualicum River in Qualicum Beach.
Caspian Tern, Common Loon, Pacific Loon, 200 plus Bonaparte's Gull, Bald Eagle, Barn Swallow, Violet-green Swallow, Mute Swan and a small pod of killer whales were seen at the mouth of the Campbell River Estuary in Campbell River.

Friday, May 16
A Western Tanager, a Bullock's Oriole, Townsend's, Wilson's and Yellow Warblers were seen at Buttertubs Marsh in Nanaimo.
A Black-headed Grosbeak was seen sitting on a clothesline at Extension, south of Nanaimo.

Thursday, May 15:
Four Caspian Terns were seen at Biggs Park near the Duke Point Ferry in south Nanaimo.
A male Black-headed Grosbeak is coming to feeders at Morningstar Golf Course in French Creek.

Tuesday May 23:
Three Evening Grosbeaks were seen along Lauren Place in Nanaimo.

Monday, May 12:
A Black-headed Grosbeak was seen in the 1100 block of Cloke Road in Ladysmith.