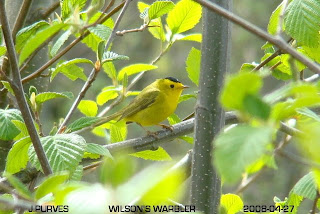 Saturday, May 03:
Several Evening Grosbeaks were seen in the area of Morden Colliery Provincial Park parking lot.
Two Townsend's Solitaires were seen at Wallbeach in Nanoose Bay.
Six Wilson's Snipe, several Peeps and one Killdeer were seen at the Kay Road drainage Ponds in Parksville.

Friday, May 02
A Lincoln's Sparrow was seen along Andrea Crescent in Upper Lantzville.
An American Goldfinch was seen in the 3700 block of Jingle Pot Road in Nanaimo.

Thursday, May 01:
Three Hermit Thrush were foraging and chasing each other. Six Golden-crowned Sparrows, and a Lincoln Sparrow were seen in a yard in the 5300 Block of Hammond Bay Road in Nanaimo.
An Osprey flew over Upper Lantzville.

Tuesday, April 29:
A single Whimbrel was seen from the spit this morning at Piper's Lagoon Park on the inside mud flats.

Monday April 28:
Three American Goldfinch were seen in the 2000 block of Cedar Road in Cedar.
A male Golden-crowned Kinglet was seen feeding in a yard in French Creek.

Saturday April 26:
A flock of Evening Grosbeaks were seen in the 3900 block of Valewood Drive in Deerwood Park in Nanaimo.

Your blog is an inspiration for birdwatcher everywhere. Thank you for sharing!