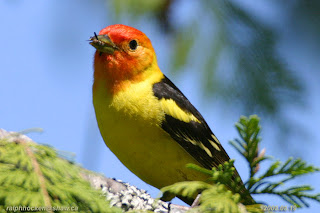 The Wednesday Bird Walk went to the Springwood Park in Parksville. Twelve birders saw and heard thirty-eight species of birds during the morning. We had a "birding by ear" birdwalk--there were a large number of birds high up trees, obscured by the new leaves. The highlights included seeing both a Warbling Vireo and a Red-eyed Vireo. At the end of the walk while were tallying the species, we were entertained by two Black-headed Grosbeaks.
We heard, but did not see, seven out of the eight species of Warblers that nest on the island--Orange-crowned Warbler,Yellow Warbler, Yellow-rumped Warbler, Black-throated Gray Warbler, Townsend's Warbler, Common Yellowthroat and Wilson's Warbler. The only species of Warbler not heard on the walk was the MacGillivray's. It will be the "target bird" next week!

The Backyard Wildbird & Nature Store's weekly bird walk in the Parksville/Qualicum Beach area is on Wednesday mornings at Participants meet at the Parksville Visitor Centre at Highway 19A and in Parksville at Rain and/or heavy winds will deter us--but we will plan a walk for every week. Everyone is welcome to bring their binoculars and join us for a morning of birding. For the weekly location of the birdwalk, please call Neil Robins at (250) 954-1928 or The Backyard Wildbird & Nature Store at 1-888-249-4145.