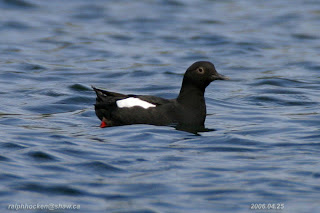 The Wednesday Bird Walk went to went to the Plummer Road side of the Englishman River in Parksville. Seven birders found fifty-four species of birds during the morning. Included in the highlights were the sightings of a Wilson's Warbler and several Rough-winged Swallows. Two Merlins flew right over us as we watched from the boardwalk on the mud flats. At the ocean we saw Pacific Loon, Common Loon, Pigeon Guillemot, Red-necked Grebe, Double-crested Cormorant, Pelagic Cormorant, Mew Gull, California Gull, Herring Gull, Glaucous-winged Gull and two flocks of Brant Geese.

The Backyard Wildbird & Nature Store's weekly bird walk in the Parksville/Qualicum Beach area is on Wednesday mornings at Participants meet at the Parksville Visitor Centre at Highway 19A and in Parksville at Snow, rain and/or heavy winds will deter us--but we will plan a walk for every week. Everyone is welcome to bring their binoculars and join us for a morning of birding. For the weekly location of the birdwalk, please call Neil Robins at (250) 954-1928 or The Backyard Wildbird & Nature Store at 1-888-249-4145.