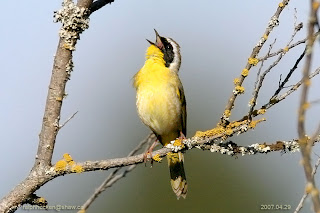 Common Yellow-throat:Ralph Hocken Photo.
The Backyard Wildbird & Nature Store
Nanaimo Bird Alert
To report your sightings
phone the Store at 250-390-3669
e-mail us at thebackyard@shaw.ca
call the Bird Alert at 250-390-3029
or www.thebirdstore.blogspot.com
Also check the birdstore blog for the latest bird alerts and updates:
www.thebirdstore.blogspot.com

Friday, June 20:
RARE BIRD ALERT
A WHITE-BREASTED NUTHATCH was seen and heard along Grant Road near French Road in Sooke. The White-Breasted Nuthatch is not normally found on Vancouver Island. It is a resident of the interior of British Columbia and east of the Rockies.
A Mourning Dove was spotted in Sooke.
A Virginia Rail was heard near the Beaver Ponds at Morrell Wildlife Sanctuary in Nanaimo.
A House Wren was seen and heard in the Departure Bay area of Nanaimo.
A Common Nighthawk was seen over Dunsmuir Crescent in Ladysmith.

Thursday June 19:
Two fledglings and two adult Barn Owls left their nest today near Quenelle Lake in Cedar.
Twenty-six Heermann's Gulls, a nesting pair of Chipping Sparrows, a singing Willow Flycatcher, an American Goldfinch, Yellow, Yellow-rumped, Orange-crowned and Wilson's Warblers, Common Yellow-throats, and a nesting pair of Hairy Woodpeckers and Downy Woodpeckers were seen at Jordan River.
A nesting pair of Red-breasted Sapsuckers were seen at Shirley, on the west coast of Vancouver Island.
A Great Horned Owl was seen in a backyard along Waldbank Road near Sealand Park in Nanaimo. A word of caution--a Cougar has been sighted in this area.
A Peregrine Falcon and four Osprey were seen at Buttertubs Marsh in Nanaimo.
Pine Siskins and Western Tanagers are visiting feeders in a yard in Lantzville.

Monday June 16:
An Osprey was spotted in downtown Nanaimo over Albert and Dunsmuir Streets.

Sunday June 15:
RARE BIRD ALERT
White-winged Crossbills were heard singing about twenty miles west of Chemainus. White-winged Crossbills are not normally found on Vancouver Island, however they are common in most other areas of Canada.
Peregrine Falcon was seen at Duke Point near the Ferry Terminal in south Nanaimo.
Three Osprey were seen flying over the Townsite area near Mansfield Park in Nanaimo.
Two Blue-winged Teal were seen on a wetland near Crofton.

Thursday, June 12:
An American Dipper and a Red-breasted Sapsucker were seen near Witchcraft Lake along Benson View Road in Nanaimo.
Three Osprey were spotted at Buttertubs Marsh in Nanaimo.