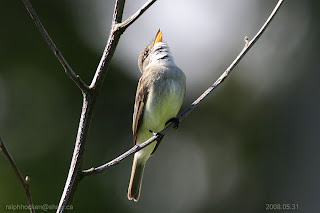 Thursday, May 05:
A second year California Gull was seen at Columbia Beach.
Wednesday, June 04:
A dark phase Snow Goose was seen at Buttertubs Marsh in Nanaimo.
A Common Nighthawk was seen flying over Parksville.
Tuesday, June 03:
A Bullock's Oriole, Red-breasted Nuthatches, Red Crossbills, a pair of Red Breasted Sapsuckers, Purple Finch, Anna's Hummingbirds, Pine Siskins, House Finch and American Goldfinch were seen in a yard in Cedar.
Monday June 02:
Two adult and two young Great Horned Owls were seen about 200 yards off the end of Wiltshire Road in Linley Valley, Nanaimo.
Two Osprey, a Virginia Rail, a white phase Snow Goose and a dark phase Snow Goose were seen at Buttertubs March in Nanaimo.
A Bullock's Oriole was seen in the York Lake area near Cedar and Nairne Road in Cedar.
Sunday June 01:
A Western Wood-pewee was seen along Rentz Road near the Coldwater Farm in Parksville.
An Olive-sided Flycatcher was seen in the woods along Renz Road at Parkville.