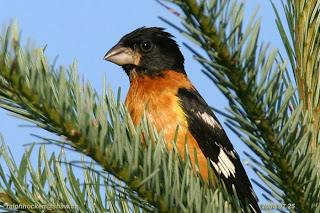 Please remember, when reporting a sighting, to leave your name and phone
number, along with the date, name and location of your sighting.
Sunday, June 29, 2008:
The Sunday Bird Walk went to the Linley Valley in Nanaimo. Among the highlights were the sighting of several Western Tanagers with two of them frolicking--obviously youngsters--on the bushes not far from us. On Cottle Lake we saw a female Wood Duck with eight small chicks sitting on a log. When she left the log and swam away all the chicks followed in single file. We heard many Orange-crowned Warblers singing and we observed one gleaning insects high up in the trees. We saw a flock of Cedar Waxwings flying out from their perches and hawking insects over Cottle Lake. We were entertained by three Rufous Hummingbirds flying above us and chasing each other and then perching and then chase each other again over and over again--youngsters again, we thought!
Fifteen birders found the following thirty-five species of birds:
Canada Goose,Wood Duck, Hooded Merganser, Mallard, Turkey Vulture, Bald Eagle, Rufous Hummingbird, Downy Woodpecker, Northern Flicker, Pileated Woodpecker, Pacific-slope Flycatcher, Willow Flycatcher, Cassin's Vireo, Common Raven, Violet-green Swallow, Northern Rough-winged Swallow, Chestnut-backed Chickadee, Red-breasted Nuthatch, Bewick's Wren, Golden-crowned Kinglet, Swainson's Thrush, American Robin, Cedar Waxwing, Orange-crowned Warbler, Black-throated Gray Warbler,Townsend's Warbler, Western Tanager, Spotted Towhee, Black-headed Grosbeak, Brown-headed Cowbird, Song Sparrow, Purple Finch, Red Crossbills, American Goldfinch and Pine Siskin.