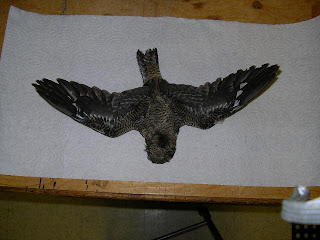 A lady brought a bird into the Bird Store on Sunday. She had picked it up from her driveway in the 6200 block of Farber Way in Nanaimo, where it had been for a few hours previous.
The bird was breathing when it was first brought in, but it died an hour or so later. There were no visible injuries on the bird.

It has been identified as a female Common Poorwill. It is a small thrush sized bird with short rounded tail with buffy corners. It has rounded wings, with no white bars.
The measurements are...
Tip of bill to tip of tail--7.50"
Wing span --17.25"

The Common Poorwill is normally found in the Central to Western United States region and up into the Okaganan. It has only been recorded on Vancouver Island on one previous occasion in 1953.

Nighthawk: poorwills do not have white in their wings.

Scroll down to see specimen of real poorwill http://www.libertyhavenranch.com/critters.html