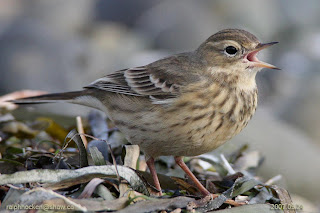 Saturday September 13:
A Prairie Falcon, three Broad-winged Hawks and a Swainson's Hawk were seen near the East Sooke Regional Park.

Friday September 12:
An American Pipit was seen along Colbourne Drive in Nanaimo.
Yellow Warblers and one Palm Warbler were seen at Jordan River.