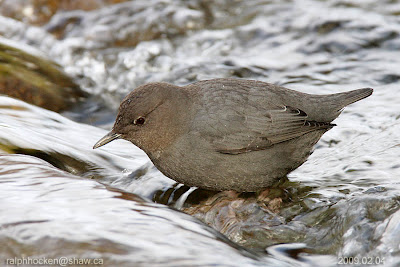 Friday February 13:Twelve House Finches were seen on the trees beside Cedar Road near Hill Road in Ladysmith.

Twenty-seven California Quail were visiting a back yard in the 2100 block of Wren Road in Nanaimo.

Two Western Gulls were seen on the High School playing fields in Duncan.

A Silver Pheasant was spotted near Linley Valley in Nanaimo.

Tuesday February 10:
The Tuesday Bird Walk went to Rathtrevor Provincial Park in Parksville. Twelve hardy birders saw and heard seventeen species of birds.
The winds were strong from the southeast and seas were rough with heavy pounding surf and the blustery rain and snow followed us all morning. It was an awesome scene seeing the sea in it's dark winter stormy mode.
The big surprise of the morning was the sighting of a flock of over two hundred Brant Geese flying near the shore. A large flock of Dunlin and Black-bellied Plovers were feeding along the tide line and we spotted an American Golden Plover feeding in with the Black-bellied Plovers. A Common Loon and a Yellow-billed Loon were riding the surf offshore. Long lines of Surf Scoters and American Wigeon flew just above the water heading down the Strait of Georgia. We spotted a Brown Creeper feeding as it climbed a big Fir Tree. A fast flying Red-tailed Hawk flew over us heading south.
Twelve birders found the following seventeen species of birds:
Brant , American Wigeon, Bufflehead, Common Goldeneye, Common Loon,
Yellow-billed Loon, Bald Eagle, Red-tailed Hawk, Black-bellied Plover,
American Golden-Plover, Black Oystercatcher, Black Turnstone, Dunlin, Mew Gull,
Thayer's Gull, Glaucous-winged Gull and Brown Creeper.