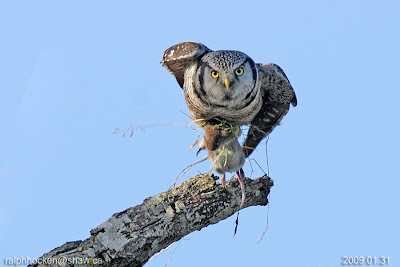 Sunday February 08, 2009:
" Rare bird alert--Northern Hawk Owl"
The Northern Hawk Owl along the Morden Road in south Nanaimo has been seen everyday since Saturday January 24, 2009 and is still in this same area today. The owl is a rare sighting on Vancouver Island, however it can be seen east and north of the interior of British Columbia, as well as across the rest of Canada.

A low flying Peregrine Falcon flew over the Backyard Wildbird and Nature Store in Nanaimo this morning.

Saturday February 07:
A Barred Owl was perched in a California Red Cedar tree in a garden in the 400 block of Stewart Avenue in Nanaimo.

Friday February 06:
A Northern Harrier was seen over Woodthrush Place in Nanaimo.

A Northern Harrier, a Merlin and a Short-eared Owl were spotted at the Nanaimo River Estuary in south Nanaimo.

Tuesday February 03:
The Tuesday Bird Walk went to the Shelly Road side of the Englishman River Estuary in Parksville. Thirteen birders saw and heard forty-nine species of birds. The winds and seas were calm and the sun was shinning. It was a great day to be birding!
The highlights of the morning included the sighting of a flock of five hundred Dunlin and a small flock of Black-bellied Plovers flying down the Strait of Georgia. An Eurasian Wigeon was spotted among the American Widgeons that were feeding near the shoreline, two Gadwall in the estuary swam slowly away from us. We heard two Pileated Woodpecker calling close by and then we watched as they flew over the river giving us a quick view. We saw a Bewick's Wren and a Fox Sparrow in a low bush near the viewing tower. A Cooper's Hawk was perched in a low bush and there were Golden-crowned Sparrows in the nearby bushes. Two flocks of busy Bushtits and a flock of Golden-crowned Kinglets flew by us in some low bushes next to the trail. We saw a large number of Bald Eagles and Northern Flickers perched in the trees throughout the walk.
Thirteen birders found the following forty-nine species of birds:
Canada Goose, Gadwall, Eurasian Wigeon, American Wigeon, Mallard, Northern Pintail, Green-winged Teal, Surf Scoter, White-winged Scoter, Bufflehead,
Common Goldeneye, Barrow's Goldeneye, Hooded Merganser, Common Merganser, Pacific Loon, Common Loon, Horned Grebe, Red-necked Grebe,
Great Blue Heron, Bald Eagle, Cooper's Hawk, Black-bellied Plover, Killdeer, Dunlin,
Mew Gull, Thayer's Gull, Glaucous-winged Gull, Belted Kingfisher, Downy Woodpecker, Northern Flicker, Pileated Woodpecker, Steller's Jay, Northwestern Crow, Common Raven, Chestnut-backed Chickadee, Bushtit, Red-breasted Nuthatch, Bewick's Wren, Winter Wren, Golden-crowned Kinglet, American Robin, Varied Thrush, European Starling, Spotted Towhee, Fox Sparrow, Song Sparrow, Golden-crowned Sparrow, Dark-eyed Junco and House Finch.