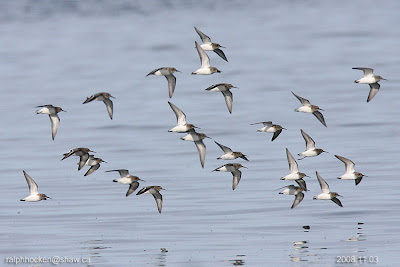 
The Tuesday Bird Walk went to the Shelly Road side of the Englishman River Estuary in Parksville. Thirteen birders saw and heard forty-nine species of birds. The winds and seas were calm and the sun was shinning. It was a great day to be birding!

The highlights of the morning included the sighting of a flock of five hundred Dunlin and a small flock of Black-bellied Plovers flying down the Strait of Georgia. An Eurasian Wigeon was spotted among the American Wigeons that were feeding near the shoreline, two Gadwall in the estuary swam slowly away from us. We heard two Pileated Woodpecker calling close by and then we watched as they flew over the river giving us a quick view. We saw a Bewick's Wren and a Fox Sparrow in a low bush near the viewing tower. A Cooper's Hawk was perched in a low bush and there were Golden-crowned Sparrows in the nearby bushes. Two flocks of busy Bushtits and a flock of Golden-crowned Kinglets flew by us in some low bushes next to the trail. We saw a large number of Bald Eagles and Northern Flickers perched in the trees throughout the walk.