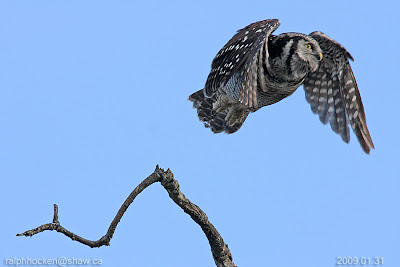 Sunday February 01, 2009:
" Rare bird alert--Northern Hawk Owl"
The Northern Hawk Owl along the Morden Road in south Nanaimo has been seen everyday since Saturday January 24, 2009 and is still in this same area today.

A collard Trumpeter Swan was spotted along Cowichan Bay Road in Duncan.

A Snow Goose was spotted at Somenos Marsh in Duncan.

A flock of Canada Geese, Trumpeter Swans and seven Killdeer.ere spotted at the Westhaven Farm off highway one and the Crofton exit.

Wednesday January 28:
A Northern Harrier was spotted at the Nanaimo River Estuary in south Nanaimo.

Tuesday January 27:
The Tuesday Bird Walk went to the Little Qualicum River Estuary. Seven birders saw and heard thirty-eight species of birds. The winds were brisk, the surf was up and rolling into shore and there were some snow flurries through-out the morning.
The highlights of the morning included the sighting of six Trumpeter Swans and four Great Blue Herons resting in the estuary when we arrived. Two Common Murres raced down the Strait of Georgia just above the water . There were large flocks of Greater Scaup, Harlequin Ducks, Surf Scoters, White-winged Scoters, Black Scoters and Bufflehead not far from shore. We saw several species of Gulls including hundreds of Mew Gulls, a Ring-billed Gull, fifty Thayer's Gulls, six Western Gulls, hundreds of Glaucous-winged Gulls and two Glaucous Gulls. Further offshore we spotted a Red-throated Loon, four Pacific Loons, three Horned Grebes, a Red-necked Grebe and a Brandt's Cormorant riding the strong waves. We spotted a Red-tailed Hawk perched on a tall tree across the estuary.

A Snow Goose was seen at Somenos Marsh in Duncan.

A Male Eurasian Wigeon was seen with over seventy American Wigeon at the Parksville Community Park in Parksville.

Monday January 26:
"Rare bird alert- Northern Hawk Owl"
A Northern Hawk Owl has been spotted along Morden Road in south Nanaimo. The owl is a rare sighting on Vancouver Island, however can be seen east and north of the interior of British Columbia, as well as across the rest of Canada.

A Red-breasted Sapsucker, a Downy Woodpecker and Northern Flickers were seen along Vista View Crescent in the Rocky Point area of Nanaimo.

An Anna's Hummingbird is visiting feeders in the 7200 block of Aulds Road in Nanaimo.

A Peregrine Falcon was seen in the 1600 block of Brierly Hill in Nanaimo.

A sharp-shinned hawk landed on a window awning in the pre-100 block of Prideaux Street, near the Millstone River in Nanaimo.