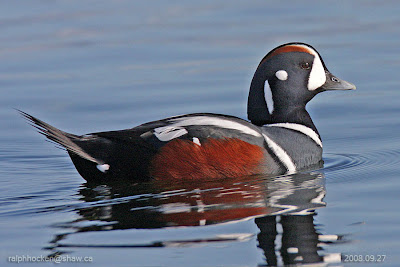 The winds were brisk, the surf was up and rolling into shore and there were some snow flurries through-out the morning.

The highlights of the morning included the sighting of six Trumpeter Swans and four Great Blue Herons resting in the estuary when we arrived. Two Common Murres raced down the Strait of Georgia just above the water . There were large flocks of Greater Scaup, Harlequin Ducks, Surf Scoters, White-winged Scoters, Black Scoters and Bufflehead not far from shore. We saw several species of Gulls including hundreds of Mew Gulls, a Ring-billed Gull, fifty Thayer's Gulls, six Western Gulls, hundreds of Glaucous-winged Gulls and two Glaucous Gulls. Further offshore we spotted a Rd-throated Loon, four Pacific Loons, three Horned Grebes, a Red-necked Grebe and a Brandt's Cormorant riding the strong waves. We spotted a Red-tailed Hawk perched on a tall tree across the estuary.

The Backyard Wildbird & Nature Store's weekly bird walk in the Parksville/Qualicum Beach area is on Tuesday mornings at 9 a.m. Participants meet at the at the Parksville Beach Community Park, at the parking area in front of the playground at 9 a.m. Rain and/or heavy winds will deter us--but we will plan a walk for every week. Everyone is welcome to bring their binoculars and join us for a morning of birding. For the weekly location of the birdwalk, please call Neil Robins at 250-954-1928 or The Backyard Wildbird & Nature Store at 1-888-249-4145.