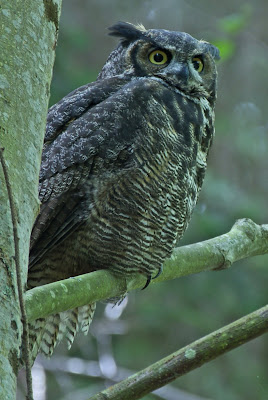 Saturday, January 03:
A Short-eared Owl and a Northern Harrier were spotted at the Nanaimo River Estuary in south Nanaimo.

Thursday January 01:
Two Rufous Hummingbirds were spotted in a yard near the corner of Hammond Bay Road and Linley Road in Nanaimo.

A Townsend's Warbler was spotted at a suet feeder in the 5700 block of Turner Road in Nanaimo.

Monday December 29:
Four Varied Thrush, a Bewick's Wren and a Brown Creeper were seen in a backyard along Southampton Road in Nanaimo.

Sunday December 28:
A Great Horned Owl was seen and heard on the Queen Alexandra grounds up in the Willow Trees in Victoria.

Anna’s Hummingbirds, Northern Flickers, Dark-eyed Juncos and House Finches are regular visitors to backyard feeders in the 600 block of Chestnut Street in the Brechin Area of Nanaimo.

A brief summary of the Nanaimo Christmas Bird Count 2008.

We had a fantastic day for the Nanaimo Christmas Bird Count on Sunday, enjoying sunny skies, relatively warm temperatures, and mostly clear road conditions while we counted every last bird we could find in the Nanaimo count circle. Thank goodness Monday's weather didn't come a day early!
Overall, I think our count for individuals of birds will be down a bit due to the amount of snow on the ground in the uplands, but our species count wasn't greatly affected. Every bit of open water was well populated with waterfowl and the coastal areas also produced good numbers of birds, although everyone seemed to remark on the lack of scoters, and Pigeon Guillemots in particular, although small numbers of each were recorded. In the upland portions of the count circle the noticeably absent species was the Red Crossbill, with only two reported on the entire count so far!
Fortunately, Doug Henderson and Eveline Stokkink very graciously took a team out on the water to survey the small islands off of Nanaimo and the offshore waters of Georgia Strait within the count circle. They were thankful for the nice weather and relatively calm seas.
Highlights for them were a huge pod of ~200 Pacific White-sided Dolphins that rode the bow of their boat and put on quite a show for about 20 minutes, and a good number of rock shorebirds (200+ Surfbirds and 5 Rock Sandpipers) on the Five Fingers Islands. A very big thanks to Doug and Eveline!
Highlights elsewhere in the count circle included a Yellow-billed Loon off of Piper's Lagoon sighted by Karl Ricker and Jim Wisnia; a Snow Goose near Brannen Lake sighted by John Brighton and Janie Agar; a Ruddy Duck (rare in this circle in the last 10 years) in Brannen Lake sighted by Rhys Harrison and Joe Crichton; an American Kestrel in the
Diver's Lake/Long Lake area sighted by Martin Lane and Sandy Shaw; a Greater Yellowlegs in the Cable Bay/Boat Harbour area of Cedar by the Sea sighted by Bruce Whittington and Wanda Dombrowski; a few Spotted Sandpipers near the foot of Entwhistle Road in north Nanaimo and on Newcastle Island; an impressive 9 individual owls of 4 species including: 1 Northern Saw-whet Owl, 1 Great Horned Owl, and 1 Barred
Owl recorded by Ryan and Andrew Cathers, 3 Great Horned Owls recorded by Peter and Anneke Vankoerkerle, 1 Great Horned Owl recorded by Margie Bryant, and 2 Short-eared Owls at the Nanaimo River Estuary recorded by Carlo Pavan, Val George, and Ruth Rutledge; a possible Lewis's Woodpecker was reported from Gabriola Island by Jannie Pedersen, photo confirmation is awaited; and the usual Northern Shrike was seen on the Nanaimo River Estuary by Carlo Pavan, Val George, and Ruth Rutledge; bringing our unofficial total so far to 116 species.
Birds missed this year that are possible to see during the count (or count week) are as follows:
Wood Duck
Any grouse species
Band-tailed Pigeon (hopefully a feeder count will report in with some
of these)
Hutton's Vireo
American Dipper
Western Meadowlark
Please keep your eye out and let me know if you see these species until midnight Dec. 31 (the end of count week) in the Nanaimo count circle (from Woodgrove Mall to just north of the Cassidy Airport).
Thanks to everyone who participated this year, and especially those of you who came to the Kin Hut after the count and contributed to the potluck. It was a bit hairy keeping everything organized this year with the weeks of snow preceding the count but it all worked out and it was a real treat seeing everyone and sharing stories with you all
by the fire and with lots of good food!
Keep well and warm!
Carlo Pavan
Compiler, Nanaimo Christmas Bird Count