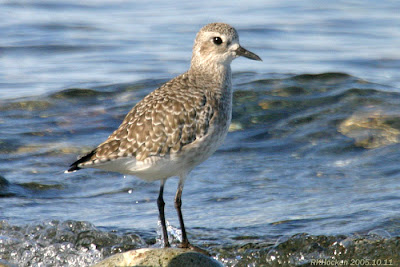 
The Tuesday Bird Walk went to the Columbia Beach. Eight birders saw and heard forty species of birds. The bird of the morning was a first winter Barn Swallow--a very unusual bird to be in this area at this time of the year. This first year winter plummage bird is usually seen in Argentina as a rule, however there have been some sightings of a similar bird in Oregon, Washington and in Vancouver in the past week. We observed the Barn Swallow through our spotting scopes as it rested on a small bush on an empty lot along the waterfront. White-crowned Sparrows, Golden-crowned Sparrows, House Finch and Purple Finch were in the same area.

The sea was calm on a foggy January morning. Through the heavy fog we were able to find American Wigeon, Mallard, Harlequin Ducks, Bufflehead and Common Goldeneye on the Strait of Georgia. On the gravel bar we could make out a Black-bellied Plover, three Killdeer, five Black Oystercatcher, one Greater Yellowlegs probing the water for food and twenty Black Turnstone on the tideline probing the sand for food.

The Backyard Wildbird & Nature Store's weekly bird walk in the Parksville/Qualicum Beach area is on Tuesday mornings at 9 a.m. Participants meet at the at the Parksville Beach Community Park, at the parking area in front of the playground at 9 a.m. Rain and/or heavy winds will deter us--but we will plan a walk for every week. Everyone is welcome to bring their binoculars and join us for a morning of birding. For the weekly location of the birdwalk, please call Neil Robins at 250-954-1928 or The Backyard Wildbird & Nature Store at 1-888-249-4145.