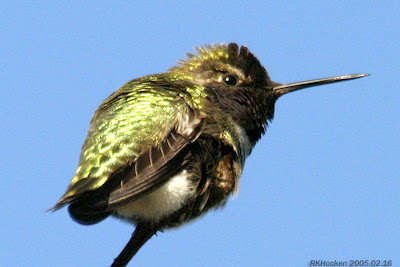 The Tuesday Bird Walk began for 2009 on January 13th and went to the Plummer Road side of the Englishman River. Eleven birders saw and heard forty-seven species of birds. The sea was calm on an overcast January morning.

We started the morning at Parksville Bay where we saw a large raft of over one hundred Surf Scoters, two Western Gulls and two Thayer's Gulls.

On the trail along the Englishman River the highlights included a Brown Creeper working it's way up a tall fir tree, a Red-breasted Nuthatch calling and landing on a nearby tree, two Bald Eagles calling from the tall snags and a small flock of Golden-crowned Kinglets feeding on bushes low to the ground. There were Common Loons, Pacific Loons, Horned Grebes, Mew Gulls, Harlequin Ducks, Double-crested Cormorants and Pelagic Cormorants on the Strait of Georgia. We spotted a Anna's Hummingbird perched in a tree and a Sharp-shinned Hawk flew over us.