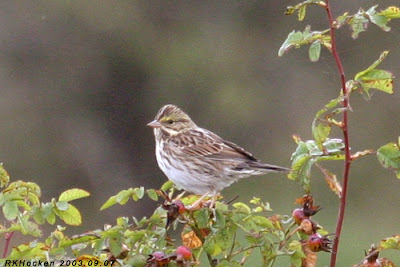 Sunday April 05, 2009:
A Mountain Bluebird was spotted near the Rockinghorse Pub in Nanoose Bay.

A Mourning Dove was seen along Northwest Bay Road near Craig Bay in Parksville.

Wednesday April 01:
A Rufous Hummingbird was seen visiting feeders in the 600 block of Fawcett Road in Cedar.

Tuesday March 31:
The Tuesday Bird Walk went to Rathtrevor Provincial Park in Parksville. The morning was sunny with cloudy periods and the winds were brisk from the west.
Five birders saw and heard thirty-eight species of birds.
Among the highlights of the walk were about 1000 Brant Geese flying in and out of Rathtrevor Beach all morning. Long lines of Surf Scoters and Long-tailed Ducks flew over the white caps and roaring seas, heading up the Strait of Georgia. We saw Black-bellied Plovers and Dunlin crouched close to the tideline protected from the wind and surf. Eight Turkey Vultures flew over us, a Rufous Hummingbird looked down on us from the top of a bush and a Hutton's Vireo sang from the bushes on the field near the old farmhouse. As we entered the parking area at the end of the walk we spotted a Yellow-rumped Warbler calling from a low bush.
Five birders saw and heard the following thirty-eight species of birds.
Brant, American Wigeon, Mallard, Northern Pintail, Greater Scaup, Surf Scoter,
White-winged Scoter, Black Scoter, Long-tailed Duck, Bufflehead, Common Loon,
Double-crested Cormorant, , Turkey Vulture, Bald Eagle, Black-bellied Plover,
Dunlin, Mew Gull, Thayer's Gull, Glaucous-winged Gull, Rufous Hummingbird,
Northern Flicker, Hutton's Vireo, Northwestern Crow, Common Raven,
Chestnut-backed Chickadee, Bewick's Wren, Ruby-crowned Kinglet, American Robin, Varied Thrush, European Starling, Yellow-rumped Warbler, Spotted Towhee, Fox Sparrow, Song Sparrow, White-crowned Sparrow, Dark-eyed Junco, Purple Finch and Pine Siskin.

Four Violet-Green Swallows were seen over Cedar Road in Cedar.

Monday March 30:
A male Rufus Hummingbird has arrived at feeders on Monterey Drive off Jinglepot Road in Nanaimo.

A first winter Glaucous Gull was seen in with the other gulls on the High School playing fields in Duncan.

A Red-breasted Sapsucker was spotted along Biggs Road near the Deerwood area in north Nanaimo.

Sunday March 29:
A Rufous Hummingbird was seen at a backyard feeder in the Sandpiper area of French Creek.

Male and female Rufous Hummingbirds are visiting feeders along Seablush Drive in Nanoose.

Anna's Hummingbirds are nesting and a pair of Northern Flickers are getting ready to nest in the 2300 block of Marlborough Drive in Nanaimo.

Friday March 20:
Three Turkey Vultures were spotted above the Osprey nest near Fourth Street in Nanaimo.