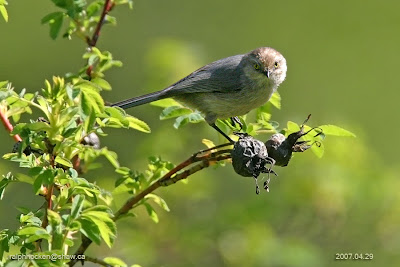 The Tuesday bird walk went to the Shelly Road side of the Englishman River Estuary in Parksville. The morning was sunny and warm. Twenty birders saw and heard forty-nine species of birds.
as we started our walk we were greeted by the loud "WHO COOKS FOR YOU" as a Barred Owl sang out. The highlights of the morning included a sighting of Black-throated Gray Warbler high up in the tops of the tall maple trees and a Hermit Thrush perched on a tree at eye level for all of us to get a good look at. Not far from the viewing tower we discovered an American Kestrel perched at the top of a tree. The Kestrel flew from the tree and hovered over the field and then returned to his perch three times as we watched in awe. We saw a Northern Shrike, a Chipping Sparrow and a Savannah Sparrow. As we finished the walk the Barred Owl again sang out "WHO COOKS FOR YOU".